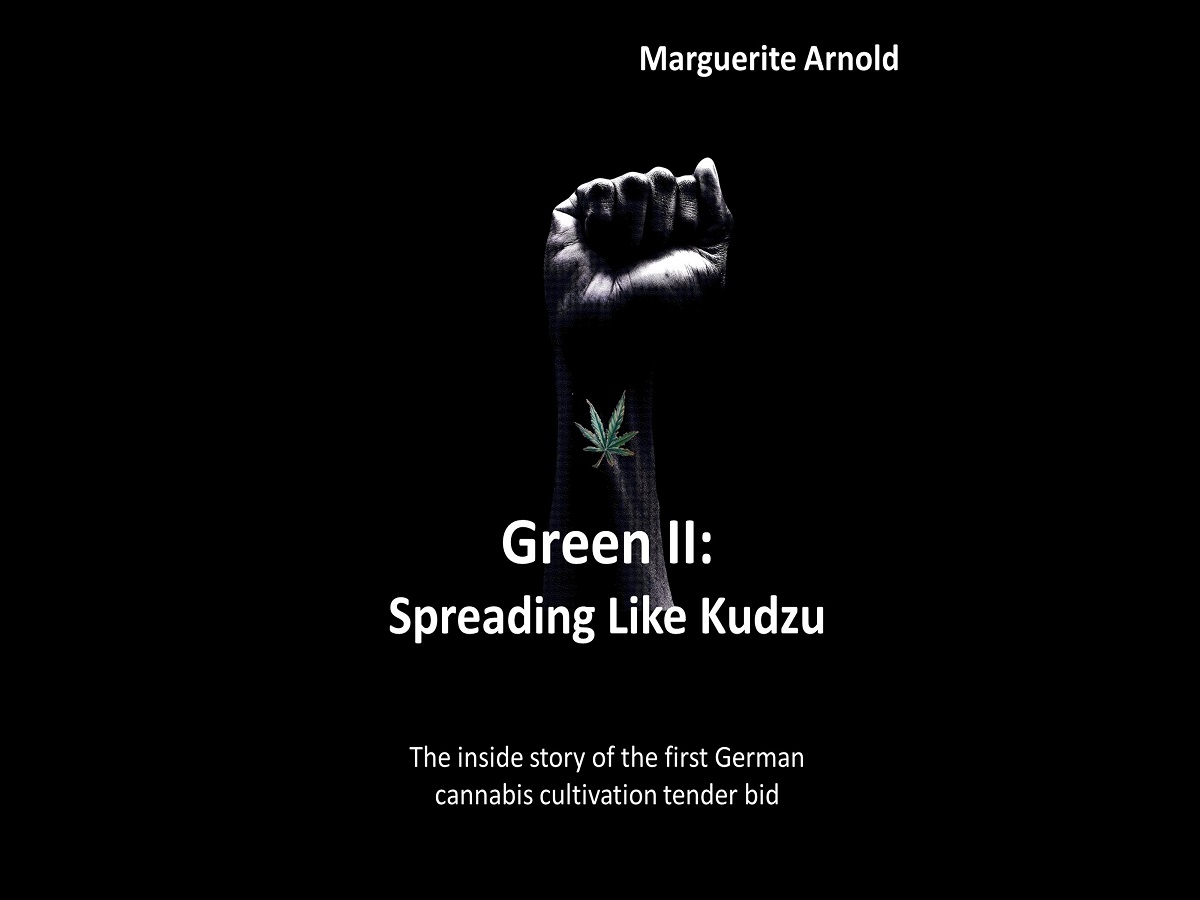 Marguerite Arnold goes behind the scenes of the exploding German cannabis market at a critical time – the first cultivation bid.

In this fascinating, hard to put down, and perfect digital Christmas stocking stuffer, Marguerite Arnold, among other things, a veteran “foreign” cannabis correspondent, tells a story that is absolutely an insider’s account of the holy mess made by authorities and companies alike as everyone scrambled to be first in this foreign green gold rush and as modern reform came to Europe.

This is, at heart, the story of the first federal cultivation bid for the cultivation and distribution of medical cannabis in Germany – but the story stretches far beyond just that.

Green II: Spreading Like Kudzu is a lot of things – but here are a few ways to describe it – starting with being the first business book about the German and European cannabis industry. It is hard to categorize the Ebook generally beyond that – except for the fact that it is one of the few so far to cover it in ways that are both professional snapshot and intriguing for other reasons (even for people with no idea what reverse mergers or cannabinoids are). As such it is part a must-read for anyone considering entering the European if not global cannabis trade (and Arnold’s explanations of the securities exploits of the Canadian public companies is a priceless, well-documented epic, worth just the price of the book alone). So is her easy-to-read description of some of the bigger issues about regulation and certification.

It is well-written and sourced, authoritative and often funny. As such it will also be a great introduction to the entire cannabis discussion for any relatives or colleagues with questions. Not to mention aspiring canna MBAs with international inclinations. Indeed, one of the more intriguing parts of the book is also the preface where Arnold briefly describes her own cannabis themed journeys – including winning a German Supreme Court case that is already considered one of the most important “Right To Return” reforms to domestic immigration law since WWII.

But Green is also part travelogue and time travel trip too. Arnold’s visit to a Polish cannabis safe house is a touching if not fascinating reflection of how the “movement” in Europe is still reminiscent of the scene in California, New York and Washington DC in the 80’s and 90’s – no matter how removed in geography and time. Her discussion of the politics and socioeconomic questions are also interesting, particularly coming at a time of such massive change for Germany and Europe as well as the Brexiting UK far beyond just cannabis. She also profiles leading experts, such as Dr. Franjo Grotenhermen, Raphael Mechoulam, and, from the private sector, international cannapreneurs she obviously encounters on a regular basis.

Of course it is hard to be entirely objective. She also gives the ICBC kudos as the most important business conference on the planet!

Here is a brief excerpt from Chapter 4 about the conference itself:

The Cannes of Cannabis

On the first day of April, Alex Rogers strode onto a stage at a central Berlin conference hotel just two blocks from the Spree River that meanders through the middle of the city. He was here to open the third annual International Cannabis Business Conference (ICBC). In front of him were close to a thousand people – all working in, in some capacity, the international legal cannabis industry from all over the world. Literally.

The ICBC is a professional conference so there are not many “wanna-bes” who show up. People who come are invested in a serious way, no matter how big or small the amount, in an industry they want a ground floor entry to as the entire conversation continues to get disruptive.

Even those who deliberately stayed home this year sent a message – namely that they could not be there without being put on the spot about burning questions only a closed and still privileged few really were in the know about. Even on that score – namely those with answers about the bid, could not defer the growing rumors, certainly by the second day of the ICBC, that news about the resolution of the tender was in the air a full week before the second lawsuit against the bid in Düsseldorf had even been heard.

For this reason, including hoping to gain an inside tip on who won and those lining up for sales generated by it by this year, the ICBC had become a well attended, avidly anticipated conference if not annual event. In the process, the conference has also served to create a unification point for not only a German but budding and nascent cross-European and indeed completely international industry to meet, make friends and do business. Especially as, even in the German market, Berlin was not the de facto “center” of the industry anymore. By this time, major firms and budding distributors were speckled all over the German map (including Cologne, Frankfurt, Munich and even the Ruhrgebeit’s Dortmund).

Attendees ran the gamut of firms too. Sure the big “name” Canadian producers were here. This year, however, as in years past, they also shared the conference with smaller firms now seeing Europe as a clear entry point on their roadmaps. Israelis were here in force, including vape makers Kanabo, unashamedly going head-to-head with industry standard if not fave, the German Storz and Bickel.

Yet everyone here, no matter whether they took a straßenbahn (street car) or hopped several international time zones to attend, had one clear mission: plotting the details if not logistics of their European landing.

Looking out across this sea of faces on the first day of the ICBC this year, it was hard for Rogers to contain his pride if not his excitement. This was going to be the best year ever. Attendance was through the roof and the conference sported a record number of sponsored booths and tables.

“Welcome to Berlin and the ICBC, y’all,” he said, a grin splitting his face from ear to ear.

“My sister went to Princeton, ” Rogers announced, and then paused, knowing, from experience what the next reaction from the crowd would be. “And I went to prison.” He couldn’t help laughing himself. There is a happy ending to this story. Rogers is living it large these days.

The attendees’ laughter rippled through the assembled throng like a gurgling brook on a sunny day because it’s a crowd-pleaser every time. Including because, in too many parts of the world, being in the “biz” means taking risks and facing down dangers that seem unimaginable to most people, still.

This opening, understandably, is one of Rogers’ favorite lines, but it also sums up a section of his career path well. It may be alliterative and kind of humorous too, but it also has the poignancy of a man who has paid his dues. If not literally done his time. And that after meeting what only the most hardened entrepreneur in any industry would not call a major setback, making the choice to survive and as a result, thrive in the new era of the cannabis industry – internationally.

Rogers is a tall, rangy, GI-Joe handsome and intense man with greying sideburns. Not to mention a supreme distaste for anyone who still resists the cannabis flood. He is, if one can give a political label to it, “pro cannabis,” and tends to fall within the more libertarian part of the industry.

Rogers also belongs to the part of the biz that no matter his current incarnations, who worked for legalization in the “old days.” As a result, he is also, like many of his peers, of the mind-set that the present can be characterized as such: the fucking drug cures cancer, is awesome for the right people recreationally too, should be regulated and does not cause insanity much less male titties. You lost the drug war, assholes. Now let me just get on with my business, damnit.

Apart from being no bullshit, however, Rogers is also bottom line focused and has managed, without the direct support of any established “cannabis player” or “power” except a highly dedicated team, to create an intriguing brand all of his own. The vibe at the ICBC in Berlin as a result, manages to encapsulate the funky edginess of the scene, both presently and even a bit of its bygone days, while being clearly a deals conference par excellence.

Even from its first year, the conference saw intense commercial activity that looked most like, truth be told, bidding wars at top film festivals rather than national agricultural promotion fairs (which is what they also function as). The former seems a bit hipper (the fashion sense certainly is). Pricing and commodity swaps and contracts aside, the characters and pure international eccentricity is certainly more like the film industry than say your average county or even national produce market.

Even at an international level.

And especially given the subject matter at hand.

Cannabis users or those connected to the industry in any way can increasingly wear their “flower power” paraphernalia, pass out business cards, have LinkedIn profiles, in Europe even bank accounts, and more with pride these days.

That comes in many flavors.

For those of a certain age who grew up literally terrorized by the Drug War, the first day of April 2019 in Berlin at the ICBC certainly felt again, like a kind of vindication and a marker of a revolution that this time, will not be stopped.